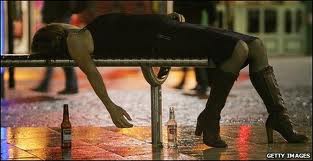 Being drunk puts a body at increased risk for all kinds of things, including sexual assault.  That is all we are saying.  Alcohol abuse is first and foremost a health and safety issue.  I am not sure that feminism plays a big role in this arena.  In my mind, feminism is about self-determination and having choices.  When a woman is drunk, she shrinks her options and gives up control of herself and her evening to alcohol’s effects and whatever pigs might be at the party.  Ladies, you have the right to get smashed, you have the right to keep up with the guys at beer pong and go wherever you want, whenever you want.  But, is it wise?  Is it worth it? A recent article in Slate Magazine urging college women to stay sober in order to help avoid dangerous scenarios like rape generated an insane dialogue in the comment section.  http://www.slate.com/articles/double_x/doublex/2013/10/sexual_assault_and_drinking_teach_women_the_connection.html People felt the author, Emily Yoffe, was blaming the victim by suggesting that being intoxicated made women more vulnerable.  She stated a fact and made perfect sense to me.  Why do we feel shy about urging women to keep their wits about them and not dull their senses with alcohol or other drugs?  The image attached to this blog shows a vulnerable woman – she is intoxicated and no longer able to keep herself safe.  This young woman doesn’t deserve to be hurt or attacked and she is not asking for trouble.  If this were your daughter, sister, wife or friend you would be concerned and get her to a safe place ASAP.  It is not blaming the victim to encourage women to keep themselves out of harm’s way by staying alert, being able to assess danger and having a safe way home.  The woman on the bench is not just vulnerable to assault, but the elements, alcoholism, arrest and a long list of other dangers.  If it were a male lying unconscious on a bench, I would be worried for him, as well.  Men get attacked, hurt and robbed, too.

I am a spirited feminist and I don’t like to question or focus on the victim’s outfit, sexual history or whether she has been drinking.  These factors shouldn’t even be relevant or addressed in court (the shockingly few cases that even make it to court). However, as a health educator who does seminars preparing young women for college life, it would be ridiculous and criminal of me not to promote the idea that being sober is safer, not just in terms of sexual assault, but in every way.  As a distance runner and a world traveler, I spend a lot of time running alone in areas that are unfamiliar to me in countries where I don’t speak the language.  I am careful about where I run, I don’t run in the dark and I never listen to music.  I want to be keenly aware of my surroundings and having my vision or hearing muted is compromising my safety.  Do I resent that I have to worry about being assaulted?  Does it bother me that there are creeps out there who would attack a jogger?  Hell, yeah.  Would it be my fault if I got raped while jogging alone in a park at night? Nope, but I am definitely not going to do that.  It isn’t wise and it’s not worth it.